In the last 3 months, starting with the tribe of Gad back in Elul, we have been learning much about how to prepare for battle, be valiant warriors, and finish well. Just like the tribes of Gad, Joseph, Ephraim and Manasseh, Benjamin was also known for his skill in battle. In fact, the Benjamites were trained to fight with their left hands so that they could catch the enemy by surprise (Judges 20:16). They are also referred to as brave warriors that carried shields and were skilled with the bow ( 1 Chron. 8:40; 2 Chron. 14:8). Genesis 49:27 is where Jacob’s blessing over the tribe says Benjamin shall be like a ravenous wolf and devour his prey.

Joining their fellow heroes from the tribe of Joseph, Biblical heroes Ehud, Mordecai  and even Saul, the first king of Israel, all come from the tribe of Benjamin. As the Lord is calling forth His army at this time, He is also calling forth His captains to step up and take their place. All these men who come from these tribes — Joshua, Gideon, King Saul, Ehud, Mordecai — are all captains in the Lord’s army. Some fought literal battles; others fought the spiritual ones. The battle we are called to fight today is not only a literal one but a spiritual one. The captains of His army must lead, and in leading, must release those under them to take their place in the army and move forward in unity.

Rachel is known to have died while giving birth to Benjamin and named him after her sorrow, but Jacob changed his name to Benjamin, which means son of my right hand or side, signifying strength and virtue.

Like Manasseh, Benjamin is not only a tribe of strength and power in battle, but also a tribe of great safety and favor. The land that they inherited (Jos 18:11-28) includes Jerusalem and Mt. Moriah. That’s why in Deu 33:12 Moses blesses them as such, “And of Benjamin he said, ‘The beloved of the LORD shall dwell in safety by him; and the LORD shall cover him all the day long, and He shall dwell between his shoulders.’”

The piece of land allotted to Benjamin is between the two leading tribes of Ephraim and Judah, and it is said that the head – the Shekinah, or presence of God – resides between the two shoulders, with Benjamin. The safety and favor comes from residing in the supernatural glory of God. Benjamin is the only tribe/ son to have been born in present-day Israel. Benjamin is also known as one of the most faithful and loyal tribes.

Benjamin is the only full brother of Joseph and was not involved when the other brothers sold him into slavery. Benjamin loved his brother Joseph so much that he named each of his 10 children in such a way that referred to the memory of his brother. The love and faithfulness exhibited by the tribe of Benjamin is something we can all learn from and use today.

In Kislev, we enter into the winter season, which is one of the darkest times of the year. But like Joseph and Benjamin, we must trust and hope and have faith in the One who has given us the dreams and promises. Kislev means trust and hope. It is a month of dreams and the month the rainbow – the arching bow which was shown to Noah as a promise. Hanukkah is also celebrated in this month, which shows us that even in our darkest hour, we still have hope and can shine our light ever so brightly.

In this holiday season, let us abide in the Shekinah presence of the Lord as He gives us safety and favor. But we must not put down our guard we must have our eyes open to see what the Lord wants to show us and be alert as to what the enemy’s schemes are so we can take him off guard and strike first! In this month of promises and dreams, allow the Lord to minister to those places in your heart, to pour out His love and breath life into them once again, as we enter into a time of fruition and of supernatural provision.

Rev. Jaime Lynn Fusco, the Founder of The Wings of Destiny, is the Israel Government Ministry of Tourism’s Director of Christian Relations for North America. She has worked with multiple ministries and organizations over the years including: Billy Graham Robert Stearns and Eagles’ Wings, Matt Sorger, Concerts of Prayer, NYC Intercessors, Christians United For Israel (CUFI), ZOA, Clarion Fund, Stand With Us, HRCARI, The Center for Jewish-Christian Understanding and Cooperation (CJCUC) in Efrat, Scholars for Peace in the Middle East, and many others. 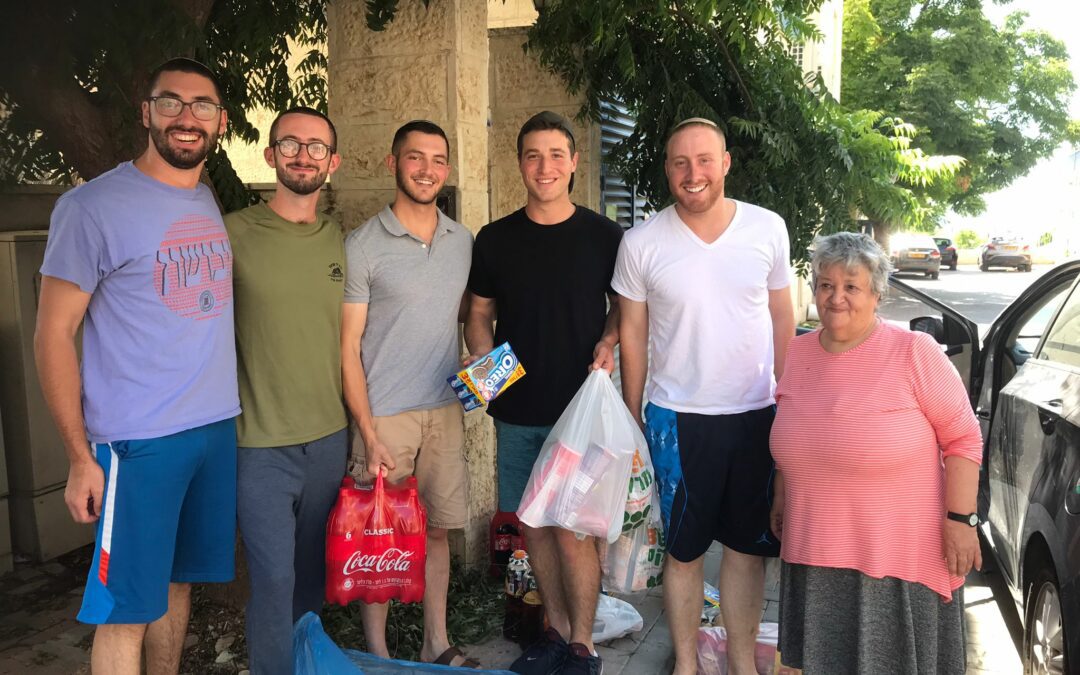 Yehudis Schamroth, the “Mother of the Soldiers,” delivered groceries every single week of July to our beloved IDF Lone Soldiers.  It’s been a hot summer for the soldiers, so they really appreciated being back in their cool apartments with the foods and drinks...

Yehudis Schamroth, the “Mother of the Soldiers,” delivered groceries every single week of July to our beloved IDF Lone Soldiers.  It’s been a hot summer for the soldiers, so they really...